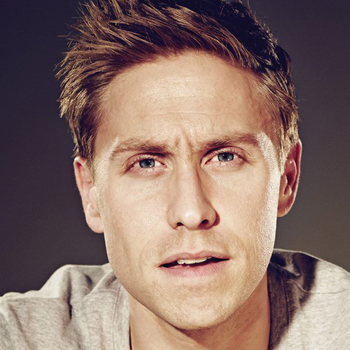 One of the hottest properties in the comedy world, Russell is known to millions as a panelist on BBC2's Mock The Week and BBC3's Russell Howard's Good News as well as from regular appearances on Never Mind The Buzzcocks (BBC2), Would I Lie To You? (BBC1), Live At The Apollo and as the new host of Comedy Central's Edinburgh and Beyond.
But it is on stage where Russell really storms it. Three sold out solo tours in three years cemented Russell's reputation as one of the best live acts in the country with his twice extended 'Dingledodies' tour playing to over 125,000 people alone.
Russell has several bestselling DVDs to his name including Russell Howard Live (2008 and 2009); Dingledodies and Right Here, Right Now.
His 2009 tour 'Big Rooms & Belly Laughs' saw Russell play 10 Arena shows and his 2011 Right Here Right Now tour has been his greatest yet. His 2014 Wonderbox tour continues to delight his fans.
In addition to being a regular on Mock The Week (which has seen viewing figures of over 5 million per week), Russell has appeared on Live At The Apollo alongside some of the biggest names in comedy; and cycled from John O'Groats to Lands End alongside David Walliams, Jimmy Carr, Fearne Cotton, Davina Mccall, Miranda Hart and Patrick Kielty for BBC Sport Relief.
A robust antidote to the depressive, recessionary mood of the moment... Right now, he's flying The Telegraph
Read More