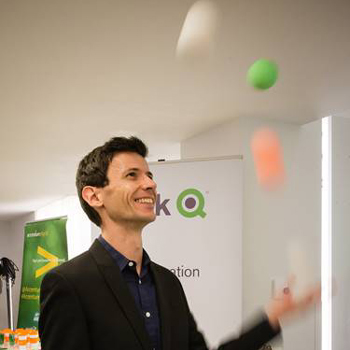 Since he first picked up a juggling ball, Sam has performed at an incredible array of shows and events ranging from stand-up comedy to ballet. He draws on the experience of his varied and successful career to entertain audiences around the world.
His first corporate engagement was at the launch event for the Ford Ka in 1996. He has been a welcome addition to many other product launches, trade shows and conferences ever since for companies such as Casio, Electrolux, GlaxoSmithKline and Adidas.
In 2007 he won a creative contest to become the star of an advert for Brylcreem beating thousands of competitors.
The following year, he performed with pop musician Mika for 50,000 people at the Parc des Princes Stadium in Paris. The largest audience of his career so far. By contrast Sam is in great demand as a Circus Skills teacher in schools throughout the UK. His school assemblies are the talk of the playground for weeks afterwards.
Sam's extensive work in TV and film includes a "how to juggle"segment on Children's BBC and other presenting work. He's even been employed as a hand model in adverts for Expedia and The Royal Mint.
Read More