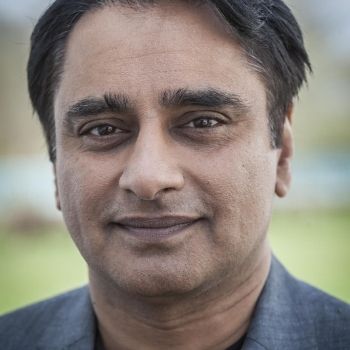 Famous for hosting The Kumars At No. 42 as Sanjeev Kumar, Sanjeev Bhaskar first came to widespread public acclaim when he starred in the comedy show 'Goodness Gracious Me' alongside Meera Syal.
West London-born Sanjeev knew from an early age that he wanted to be a comedian but his parents wanted him to continue his education. He completed a marketing degree at the University of Hertfordshire, which was followed by a short stint in marketing at IBM. But comedy beckoned, and he was writing scripts in his spare time, joining forces with close friend Nitin Sawhney to form a double act. It was not long after that, that he landed the role in the new BBC comedy series 'Goodness Gracious Me'.
From that point on, Sanjeev's career went from strength to strength. In 2001 he was given his own  show based on fictional character Sanjeev Kumar in 'The Kumars At No 42'. As Sanjeev Kumar, he hosts and broadcasts a celebrity chat show from his parents' living room, against all the odds!  The show won an Emmy Award.
2005 was a particularly memorable year for Sanjeev because he received an OBE, married co-star Meera Syal and their first child, Shaan, was born.
As a screenwriter, Sanjeev Bhaskar secured a three picture screenwriting deal , while as a star on the big screen, he has appeared in Anita and Me, The Guru, The Mystic Masseur and Notting Hill.
Currently Sanjeev can be seen on ITV's hit series Unforgotten.
With a wealth of experience in television Sanjeev is a relaxed and confident speaker whether hosting an event, presenting awards or speaking in his own right.
Read More