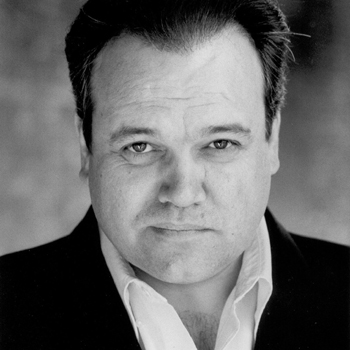 Shaun Williamson is a versatile and accomplished stand-up comedian, singer, television and stage/screen actor, presenter, entertainer, cabaret performer and after dinner speaker. Best known for his portrayal of 'Barry Evans' in EastEnders,  he also appeals to children having stared in 3 series of 'Scoop' for BBC1.

He is currently working for the National Theatre in "One Man Two Guvnors and last year stared in a number one tour of the Olivier nominated play 'The Ladykillers' and  Farragut North in Southwark Playhouse. He has just finished filming a role in the film Houdini which will be released in 2014. A favourite on TV Shaun has also appeared in Ricky Gervais' 'Extras' series 1&2 and in Ricky Gervais' new series 'Life's Too Short'.

Shaun's first love is singing. he appears regularly in cabaret with a 10-piece band and won ITV's 'Celebrity Stars in Their Eyes' for his performance as Meatloaf.
He starred as 'DJ Monty' in the West End 'Saturday Night Fever', a role he revived on a nationwide tour and in 2007 his film 'Daylight Robbery' was released.

Shaun embarked on a short tour of 'Guys and Dolls' before going into the West End in the role of Nathan Detroit.

He starred as Fagin in Oliver and in the play 'Road to Nirvana' in London and was the Narrator in The Rocky Horror Show.
He has appeared on Bremner, Bird and Fortune and The Secret Policeman' Ball at the Royal Albert Hall.

Regularly appearing as compeer, awards host, auctioneer and runs raffles, he is a master at multi tasking.

Just wanted to let you know that everyone was very impressed with Shaun at our event last Thursday.  He was excellent and made the evening with his singing and did a great job as compere.

Shaun was a true professional, he was truly amazing, funny, engaging and held the room together perfectly. We couldn't ask for a better host, we've had so much great feedback and the room was electric when he came on stage.
He even did a little song too which was fantastic. Overall we were delighted - next year is our 10th year so we really do need a magical year. I'm not sure how we're going to top Shaun but hopefully you can pull it out the bag again.
Thank you for making this such an easy process and we look forward to working with you next year.
Sammy Williams Birmingham Council Chamberlain Awards Host
I just wanted to send a quick email to thank you so much for everything you did for our charity last night. We have had some excellent feedback and we have already raised over £7,500 from the event. You were excellent on the night and it was so reassuring for us to have someone who was so accommodating.
Darren & Claire Maidstone Hope Charity charity ball Singing/Auction/Raffle/Host
I was recently lucky to be at Trecco Bay Holiday park which is based in South Wales on Sunday 1st December, and managed to catch the stage performance on Shaun Williamson which was terrific. He had the Audience in the palm of his hands,
with his family friendly comedy material, and that excellent voice he possesses. I never thought I would see the day that "Barry from EastEnders, would conga over 50 people out of the building and back again whilst in full song. but it happened this night.
I think the thing which the audience liked most of all, was how warm and welcoming, and approachable he was, Shaun spending over one hour after the show had finished, meeting and greeting all concerned. An excellent night was had by all, and I cannot recommend Shaun highly enough for anyone looking to book a talent actor, who can still live within his Cabaret roots. Just brilliant.
Tim Savage Ted Talent - Holiday Park Cabaret
"Shaun Williamson was outstanding at our Ladies Guest Night, entertaining with his witty repartee and genial nature from the very beginning of the evening.
He proved to be an excellent after-dinner speaker entertaining the whole Mess with his well crafted stories, which were personalised to the audience.
His closing with a song, totally unaccompanied, from Les Misérable's 'Bring Him Home' was truly magnificent.
In fact I have been told by multiple Mess members and their partners that there were several 'lumps in throats' by the end of his performance.
Post-dinner he made himself available to everyone, happily posing for photographs and engaging all in conversation. He was without doubt an excellent choice as an after-dinner speaker and I would recommend him to all without reservation."
Ladies' Guest Night at RAF Coningsby
"We had a really great evening last week at our Stars Awards. Please convey our thanks to Shaun what can I say,
we have been receiving such lovely comments this past week. Our staff enjoyed his comedy, singing and compeering  such a professional but approachable,
friendly and helpful. I just cannot thank him enough it was perfect."
Avante Partnership
"I just wanted to thank you for hosting our event.
I have had great feedback from so many people saying how much they enjoyed it and saying what a great job you did.  A lot of people appreciated that it was a hard gig to get 220 people going that early in the day and pre-alcoholic drink but you did it".
Corporate Communications Director, British Land
"We thoroughly enjoyed Shaun's performance. As soon as he arrived during our pre-lunch champagne reception, he was inundated with requests for autographs and photos. He joined the LOYA table for lunch and was excellent company.
Shaun started his performance with a powerful song and continuous laughter accompanied the comedy performance that followed. Overall Shaun was a great success, and we are very pleased that he was able to perform for us. He really is a very friendly, yet extremely professional entertainer."
Loo of the Year Awards
Read More