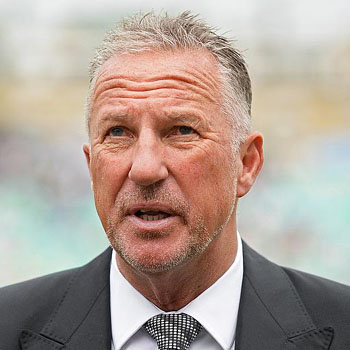 Sir Ian Terence Botham, OBE is a former England Test cricketer and Test team captain. He was a genuine all-rounder with 14 centuries and 383 wickets in Test cricket, and remains well known by his nicknames "Beefy" and "Guy the Gorilla"

While a controversial player both on and off the field, he also held a number of test cricket records and still retains the highest number of wickets taken by any England bowler.
Ian made his Test debut for England in 1977 in the Third Test against Australia. He went on to enjoy a Test career spanning 15 years, in which he played in 102 matches.
He is recognised as one of England's greatest Test players and was England's captain for 12 Tests in 1980 and 1981. As captain his tenure was brief and he achieved no wins, 8 draws and 4 losses. But in his defence, nine of his matches as captain were against the best team of the time, the West Indies, who won 12 out of the next 13 tests played against England.
Compared with many of cricket's greatest players, Ian Botham's averages appear to be fairly ordinary but he was a true all-rounder, an uncommon status at world-class level, and he could seem to win a match on his own. He was renowned as a big-hitting batsman, but with a surprisingly classical technique, and as a fast-medium paced swing bowler who could be very effective indeed when atmospheric conditions favoured his style.
During the 1981 Ashes he set a record of six sixes in a single Ashes Test Match at Old Trafford. That record remained unbroken until 2005.
Ian Botham has been a prominent fundraiser for charity undertaking many long-distance charity walks. His first, in 1985, was a 900-mile trek from John O'Groats to Land's End. His efforts were inspired after a visit to Taunton's Musgrove Park Hospital for treatment on a broken toe, when he took a wrong turn into a children's ward and was shocked to learn that some of the children had only weeks to live.
He has since raised more than ten million pounds, with the charity Leukaemia Research among the causes to benefit.