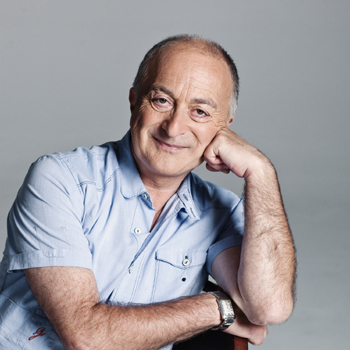 Tony presents Channel 4's archaeology series "Time Team", and played Baldrick in "Blackadder". He devised and wrote four series of the BBC's "Maid Marian and Her Merry Men" in which he played the Sheriff of Nottingham, made two series of " The Worst Jobs In History", a documentary about the elderly entitled " Me and My Mum", and a four-part series on British law called " Tony Robinson's Crime and Punishment." He has had lead roles in numerous TV series including the 1980s cult sketch show "Who Dares Wins" and ITV's sit-com "My Wonderful Life".

His first professional appearance was at the age of 13 in the original version of the stage musical "Oliver!" There followed a number of shows, films and TV appearances as a child actor. After training at the Central School of Speech and Drama, he spent several years in rep, worked for two years as a theatre director and made his first notable television appearance as the cerebral palsied Ernie Roberts in Horizon's award-winning documentary "Joey". He then moved on to the Chichester Festival Theatre, the RSC and the National Theatre.

He has made TV documentaries on a host of different subjects including The Da Vinci Code, The Peasants Revolt, the Roman Emperors, Macbeth, Robin Hood and right wing Christian fundamentalism. He presented a series on the creation of the world entitled " Apocalypse Earth", and a four-part series on the impact of climate change on ancient civilisations. He continues to work on "Time Team", has hosted " Time Team America" and excavated the site of Ned Kelly's last stand for Australian TV. He also starred in an episode of " Hotel Babylon".

He has toured his one-man stage show "Tony Robinson's Cunning Night Out" extensively, including a series of sell-out performances at the Edinburgh Festival. He has recorded audio versions of all 42 books by Terry Pratchett.

As a writer of children's television programmes he has won two Royal Television Society awards, a BAFTA and the International Prix Jeunesse. His childrens work includes thirty episodes of Central TV's "Fat Tulip's Garden", a thirteen-part BBC series based on Homer's Iliad and Odyssey called "Odysseus " the Greatest Hero of Them All", and twenty six episodes of his Old Testament series "Blood and Honey".

Books for adults include "The Worst Jobs in History", "Archaeology is Rubbish " A Beginner's Guide", co-written with Professor Mick Aston, and 'In Search of British Heroes'. He has also written many children's books, including "Tony Robinson's Kings and Queens", and in 2005 " The Worst Children's Jobs in History" (Winner of the Blue Peter Book of the Year) which was followed by the sequel " Bad Kids".

From 1996 " 2000 he was Vice-President of British Actors Equity and is currently President of the Young Archaeology Club.  From 2000 " 04 he was a member of the National Executive Committee of the Labour Party. He has been awarded Honorary Doctorates by Exeter University, Oxford Brookes, and the Open University, and Honorary MAs by Bristol University and the University of East London. In 2008 he was presented with the " Outstanding Contribution by an Individual" award by the Museums and Heritage Association and the James Joyce award by University College, Dublin.

Tony was knighted in the 2013 Birthday Honours list for public and political service.
Read More