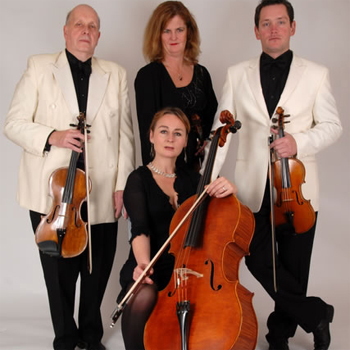 The sole aim of the string quartet Status Cymbal is to delight. Since 1988, audiences have been beguiled by their unique blend of musical styles, from established classical works through operetta, musical comedy and jazz to witty and sparkling arrangements of the latest in popular music.

The Status Cymbal approach to popular music is both refreshing and adventurous. From the beginning, works from some of Britain's finest string arrangers were commissioned, and their library extends from Bach to Rock via Strauss, Gershwin, Bernstein, Duke Ellington, the Beatles, Abba, the Carpenters, Led Zeppelin and Queen.

In addition to concert work, Status Cymbal plays regularly at venues from hotels to stately homes. They have also performed at many private and corporate functions, including several organised by the British Tourist Board and the English Tourist Authority. Radio and TV credits include the BBC Radio 2 Arts Programme and Central TV's prime-time network show "Pot of Gold", hosted by Des O'Connor