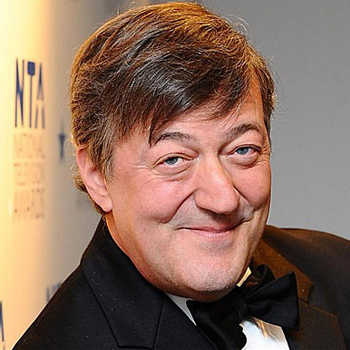 Stephen Fry's career in television began with the 1982 broadcasting of The Cellar Tapes, the 1981 Cambridge Footlights Revue which was written by Fry, Hugh Laurie, Emma Thompson and Tony Slattery. The revue caught the attention of Granada Television and Fry, Laurie and Thompson were hired to star alongside Ben Elton in There's Nothing To Worry About! A second series established Fry and Laurie's reputation as a comedy double act. In 1983, the BBC offered them their own show, which became The Crystal Cube but it was axed after the first episode. Undeterred, Fry and Laurie appeared in an episode of The Young Ones in 1984.

The BBC commissioned a sketch show in 1986 that was to become A Bit of Fry and Laurie which ran until 1995.  During this time Fry starred in Blackadder II as Lord Melchett, Blackadder the Third as the Duke of Wellington, and in Blackadder Goes Forth as General Melchett.
In 1988, he became a regular on the improvisational comedy radio show Whose Line Is It Anyway?.

Between 1990 and 1993, he starred as Jeeves (alongside Hugh Laurie's Bertie Wooster) in Jeeves and Wooster. In 2000 he played Professor Bellgrove in the BBC's Gormenghast.

In 2003, he began hosting QI, an intellectual panel game that is now one of the most-watched entertainment programmes on television, and in 2006, he won the Rose d'Or award for "Best Game Show Host".

A foray into documentary-making has seen him front the Emmy Award-winning The Secret Life of the Manic Depressive in 2006, and in 2007 a documentary on the subject of HIV. Also in 2006, he appeared in the genealogy series Who Do You Think You Are?, tracing his family tree to discover his Slovak Jewish ancestry. His six-part travel series in 2008 for the BBC, Stephen Fry in America began  was followed by More Fry in America.
In 2008 he appeared in and was executive producer of the second series of Kingdom and he played psychiatrist Dr. Gordon Wyatt in the popular American drama Bones.

His film debut in the 1985 film The Good Father was followed by a brief appearance in A Fish Called Wanda and the lead role in Peter's Friends in 1992. Portraying Oscar Wilde in the 1997 film Wilde, he received critical acclaim and in 2001, played the detective in Robert Altman's period drama, Gosford Park.

In 2003, Fry made his directorial debut with Bright Young Things, which he adapted from Evelyn Waugh's Vile Bodies. In 2001, he began hosting the BAFTAs.

He narrated the film version of The Hitchhiker's Guide to the Galaxy, and in 2005 he appeared in both A Cock and Bull Story and V for Vendetta. In 2006, he played the role of gadget-master Smithers in Stormbreaker and in 2007 appeared as himself hosting a quiz in St Trinian's.

On radio he wrote and presented Saturday Night Fry and has appeared on the panel games Just a Minute and I'm Sorry I Haven't a Clue. In 2000, he began starring as Charles Prentiss in the Radio 4 comedy Absolute Power, reprising the role for three further series on radio and two on television.

In 2007, he hosted Current Puns, an exploration into wordplay, and Radio 4: This Is Your Life, to celebrate the radio station's 40th anniversary. He also interviewed Tony Blair as part of a series of podcasts released by 10 Downing Street

In  2008, Stephen Fry's Podgrams began, in which he recounts his life and experiences and he appeared as himself in I Love Stephen Fry.  In August that year he hosted Fry's English Delight, a three part series on BBC Radio 4 about metaphor, quotation and cliché.

In 1984, he adapted the hugely successful 1930s musical, Me and My Girl, for the West End, where it ran for eight years. He also famously starred in Simon Gray's 1995 play, Cell Mates, which he left three days into the West End run, pleading stage fright. He later recalled the incident as a hypomanic episode in his documentary on bipolar disorder.
Read More