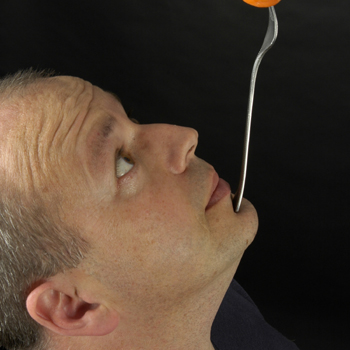 A man well known for his hilarious visual comedy show.

Steve's show comprises juggling ping pong balls with his mouth, a short demonstration of spontaneous combustion, a show stopping combination of balancing bottles and glasses, and juggling three blazing fire torches simultaneously, and ending with the astonishing spectacle of furniture juggling - a trick that hasn't been performed in over sixty years and to see Steve perform it, one can easily see why!

In the last few years Steve's career has gone from strength to strength, with top class work in theatres, private and corporate functions at home and abroad. Steve was the first British juggler in fifty years to be invited to appear before Her Majesty the Queen, on the Royal Variety Performance.
" Steve went down really well.  We thought he was hilarious and the client loved him." Steve Rawlings performed for the CBCE - July 2010

"Steve Rawlings an accomplished juggler and stunt man, who is as funny as he is clever."  The Sunday Times

"Best new trickster around, disarming patter too."  The Guardian