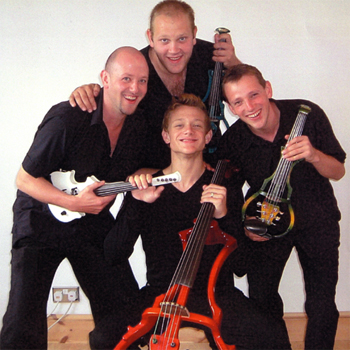 If you're looking for an evening's entertainment like you've never seen before, then meet Giles, Ralph, Graham and Neal Broadbent aka Stringfever.

With their electric instruments and unique sound, the world's first genetically modified string quartet combine exceptional musical skill with a real talent for involving and engaging audiences to provide you with a night you'll never forget.

Neal Broadbent is the little brother and an amazing musician, male model, international playboy... are all things he'd love to be when he grows up. Provides bass and live beat-box simultaneously, making him Stringfever's one man rhythm section. Plays a red five string Violectra.
Then there's cousin Graham Broadbent - gentle, jolly, giant. Heavyweight viola champion of the World. Royal College of Music. Versatile vocal chords; Marlon Brando to Kate Winslet. Plays a navy blue five string Violectra.
Since 2004 Stringfever has performed after dinner shows at over 700 major corporate events throughout Europe, including gala dinners, awards ceremonies, Christmas parties and business conferences. Their show lasts around 30 minutes and is equally suited as a grand finale to an evening or for lifting the mood of an audience before an award ceremony or presentation.
Read More