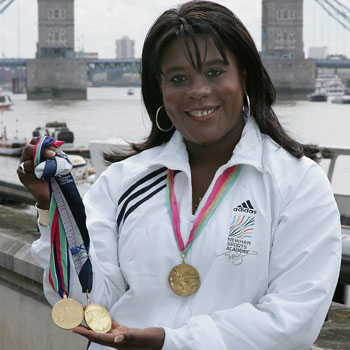 On the 6th August 1984 at the Summer Olympics in Los Angeles Tessa Sanderson won the Gold in the Women's Javelin and remains today the only British Woman to ever win a throwing Gold Medal.

Tessa represented Great Britain for 26 years. Awarded an MBE, OBE and a CBE, she was recognised by the Sunday Times with a Life Achievement Award for her dedication to sport and charitable work.

Tessa is a keynote speaker, accomplished motivational presenter, awards host and TV & radio personality across sport, entertainment and media. She is also a business ambassador for carefully selected brands that she is personally committed to.

Her media career involved television presenting for BBC, ITV, Bloomberg, GMTV, Talk Sport Radio and Sports News for Sky. Tessa regularly appears in TV shows, topical and popular. She has extensive charitable work, was a Board member of the Olympic Park Legacy Company and became Patron of Adoption UK having adopted two young twins herself. More recently she became Patron for the Birmingham Commonwealth Association.

She holds two Honorary Fellowship Degree one from South Bank University in London in 2004, and prior to this Wolverhampton Polytechnic. She also has a Honorary Masters Degree from Birmingham University. Tessa has competed in SIX Olympic games which in itself is a record which resulted in winning a Gold medal in the javelin event in 1984.

Tessa has also won many other major medals including three times Commonwealth Gold and the last being a World Cup Gold in Cuba in 1990. In the 1992 Barcelona Olympics and competing in her 5th Olympics she finished an incredible 4th place in the final.

Tessa does a variety of motivational talks and personal appearances all over the United Kingdom and can often be seen appearing on network television discussing various topics.
"Thank you for spending your time with both myself before the event proper and for the formal socialising. The feedback from the guests at the reception was very positive and they all enjoyed meeting and talking to you. Your association with the event certainly helped make it into a great success."
Lloyds TSB event at the Royal Exchange
"The event went really well thank you. Tessa was extremely approachable and had queues of people wanting a photograph with her. Tessa was extremely flexible when the timeframes moved back slightly and had a wonderful relaxed style. We really appreciated the time she took to come along"
Santander's 'Be The Best' dinner in London
Read More