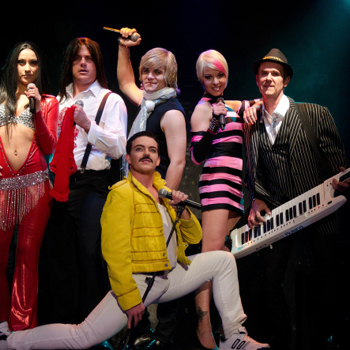 The Tribute Show are an award winning live multi-tribute act like no other band around. Their unique and hugely popular tribute acts combines all that is best from the rock and pop hall of fame over the past six decades including hits from the 60s, 70s, 80s and 90s to the present day. With first class musical ability and stunning presentation they pay tribute to the likes of ABBA, Queen, Robbie Williams, Michael Jackson, Madonna, Blondie, Madness, Prince, Cher, Buddy Holly, Ray Charles, Bill Haley, Dusty Springfield and Elvis to name but a few.

Specialising in entertaining at corporate and private events The Tribute Show has an unprecedented reputation for professionalism both on and off stage, and are certainly not your average tribute band. Carefully arranged and choreographed, they impersonate the original artistes, offering numerous lookalike & soundalike artistes in one show.
The Tribute Show have performed over 4,500 shows all over the world, to over a million people and supporting numerous celebrities and are one of the best corporate bands and social party function bands on the circuit today.
Their shows include a 50s and 60s tribute band, 70s tribute band, 80s tribute band and a Legends Tribute Show. An ABBA Tribute Band is also available for a complete evening's entertainment.
The Tribute Show are full time professionals with the equipment, knowledge and knowhow to run huge productions to the highest standards and the tightest of schedules.  They can offer several line-ups to suit  budget and requirements.
Read More