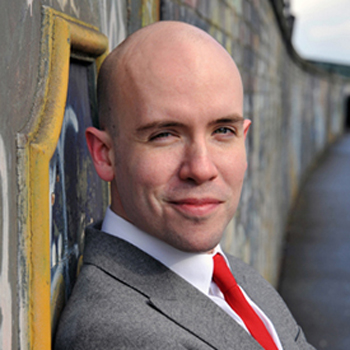 Tom Allen is a comedian, actor, writer and TV presenter who started out on the stand up circuit at the age of 22 and then went on to win both So You Think You’re Funny at the Edinburgh Comedy Festival and the BBC New Comedy Awards in the same year. Since then he has honed his unique style of sharp, acerbic wit and camp, riotous storytelling by performing to audiences all over the UK and around the world.

He has made several TV appearances on 8 Out of 10 Cats Does Countdown, Mock the Week, The Great British Bake Off’s Extra Slice, Celebrity The Crystal Maze as well as the John Bishop Show and Channel 4’s Comedy Gala at the O2 along with several appearances on Just a Minute including the 50th anniversary episode alongside Prince Charles.

In the past, his live chat show Tom Allen‘s Society has seen him bring his own inimitable comedic stylings to spur whimsical conversation with such greats as Margaret Cho, Sarah Millican, Ed Byrne, Mark Gatiss, Jack Whitehall, Amy Lamé and Matt Smith.
As a presenter, he covered the Edinburgh Festival for BBC2's The Review Show. He has also hosted The World's Greatest Bodyshockers on E4, reported on Big Brother's Big Mouth and covered the British Fashion Awards for Net-A-Porter where he interviewed Christopher Kane, Olivia Palermo and Victoria Beckham.
He wrote and performed Dictionary Corner for Channel 4's late night satirical TNT Show and has made his own documentary 'Who Is Tom Allen?' where he was regressed to his previous life (a secretary in 1970s California) and was featured in the BBC documentary about legendary stand up show, Late and Live.
As an actor he guest starred in the most recent series of Comedy Central's Threesome and has also appeared in BBC's Sensitive Skin and Fear of Fanny. Film includes Colour Me Kubrick with John Malkovich, Starter for Ten with James McEvoy and the Stephen Frears film, Tamara Drewe.
Full of energy and wit he is the perfect host for your event.
Read More