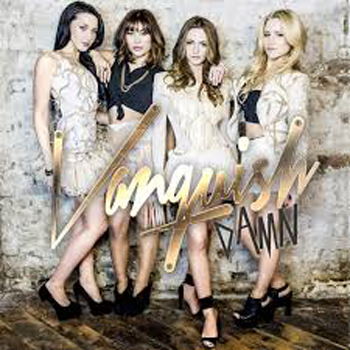 Within a month of forming at the start of July 2013, Vanquish had played their first show - in front of a crowd of 20,000 in Bristol, supporting Blue. By the autumn, they were gig veterans who had won over school kids and college students across the country, performed at a concert at Sheffield's Don Valley arena and caused such a stir with their debut show in Derby that they were invited back to play for 1000 people less than a week later.
On YouTube, views were piling up for their pop covers    well over 150,000 each for their covers of Demi Lovato's 'Don't Really Care', Miley Cyrus's 'Wrecking Ball' and Demi Lovato's 'Made in the USA'  and over 200,000 for their glorious, acoustic rendition of Katy Perry's Roar.
At a studio in Kent, original songs were being written and routines being rehearsed. Damn, Vanquish's debut single sums up the group's sophisticated sound - smart, sharp, sugar-rush pop.
Vanquish is a four-piece girl band formed the old-fashioned way by answering adverts, spending days at auditions and proving their talent by singing and dancing. The girls are on a mission to make smart, sassy pop that is musically bold and instantly addictive. All four members have distinctive voices that stand out on solos and blend beautifully.
Becky, Lisa, Sophia and Lucy aren't girls to hang around waiting for something to happen and with their striking looks, exceptional voices and dance ability, their career as a band has really taken off.
Before they auditioned, two of the girls were already making their own way in entertainment. Just a year out of college, Nottingham-born Becky had already appeared in musical theatre and at pop shows, including The Brit Awards, where she was a backing dancer for Olly Murs. Lisa, from Stoke-on-Trent, had been singing professionally for three years, fronting Christmas shows and touring holiday parks as a Lady Gaga and Katy Perry impersonator.  The other two girls were still students. Half-English, half-Balinese, London-raised teenager Sophia had only just finished her A-levels, although she had attended performing arts schools and was studying music. Lucy, from Preston, had completed a one year course in vocals and was midway through a songwriting degree.  The quartet bonded instantly.
Already Vanquish have played big parties. They became favourites at Freshers' weeks at unis across the country and went down a storm at several Gay Prides, including that first gig in Bristol. In addition they performed as the main support act for both boyband M.A.D and Rebecca Ferguson's recent tours across the UK and headlined at both The Bedford and Kensington Roof Gardens earning many more fans along the way.
Read More