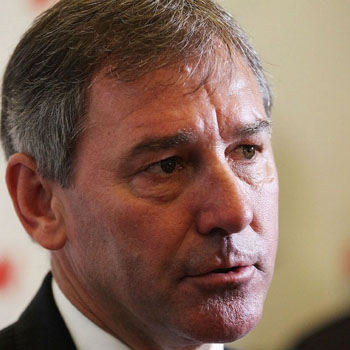 Bryan Robson OBE is an English former football manager and a former player. He is best known for playing in midfield for Manchester United, where he was the longest serving captain in club history. He is the former manager of Sheffield United after being relieved of his first team duties on 14 February. In March 2008, Robson returned to Manchester United as an ambassador for the club.

Robson began his playing career at West Bromwich Albion, before moving on to Manchester United, whom he captained to three FA Cups and a European Cup Winners' Cup. He also won two FA Premiership winners medals. Towards the end of his playing career he moved into management as player-manager with Middlesbrough. Robson had a good goal-scoring record, tackled and passed well and was also a good header of the ball. He represented England on 90 occasions, making him the sixth most capped England player of all-time and has the eleventh highest goalscoring tally with 26. Robson captained his country 65 times; only Bobby Moore and Billy Wright have captained England on more occasions. Robson is also known by the nicknames 'Robbo' and 'Captain Marvel'.

Robson began his management career with Middlesbrough in 1994, although he did not retire from playing until 1997. In seven years as Middlesbrough manager, he guided them to three Wembley finals, which they all lost, and earned them promotion to the Premier League on two occasions. He later returned to West Bromwich Albion for two years as manager, helping them become the first top division team in 14 years to avoid relegation after being bottom of the league table on Christmas Day. Less successful have been his short-lived spells as manager of Bradford City and Sheffield United, the former lasting barely six months and ending in relegation from what is now the Football League Championship, and the latter lasting less than a year and seeing his expensively-assembled side fail to challenge for promotion to the Premier League.