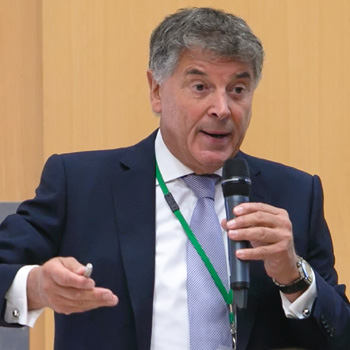 David Dein MBE is the former Vice Chairman of both Arsenal Football Club and the Football Association.  He was also President of the G-14 group of European football clubs and International Ambassador of England’s bid to host the World Cup in 2018.

At Arsenal, he was responsible for football matters taking an active role in the transfer of players and contract negotiations where he was able to use his extensive network of football contacts. Dein was behind the appointment of the then little known Arsène Wenger to the manager's job in 1996.  During his 24 years at Arsenal the club won 18 trophies including the Invincible season of 2003/04.   The Club now has the finest training facilities and the most magnificent stadium – The Emirates.

Dein was the driving force behind the creation of the FA Premier League in 1992 which is now the most successful league competition in the world.  He has been at the forefront of many important changes in football including the introduction of Goal Line Technology and VAR.

He was an early proponent of Women’s football and became President of the Arsenal Women’s Team which became one of the most successful in the league.

Since 2014 he has delivered motivational and inspirational talks in over 500 state schools for the Speakers for Schools programme.  In addition he has given talks in all of the 117 prisons in England & Wales and in 2018 launched the Twinning Project which twins professional football clubs with their local prison, providing training and coaching programmes to help offenders gain employment on release.  The objective is to reduce reoffending and save lives.

He is currently writing an autobiography with the working title of “Kicking the Doors Down”.

In 2019 he was awarded an MBE for his services to football and charity.

"David was extremely well received and gave huge credibility to our event." British Association of Sports Lawyers
"I would like to thank you most sincerely for a splendid evening on Monday. Your talk was fascinating, and your skills as an auctioneer had to be seen to be believed!"  Haberdashers Aske School
Read More