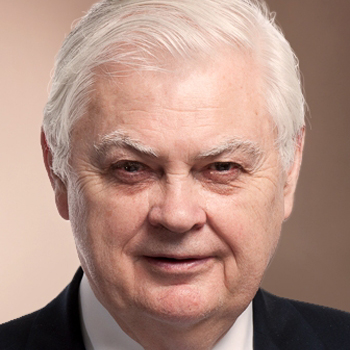 Lord Lamont (Norman Lamont) has been at the centre of British politics for many years and was the Conservative M.P. for Kingston upon Thames for 25 years. He was a Cabinet Minister under both Margaret Thatcher and John Major. He was heavily involved in the Thatcher reforms including privatisation that transformed the British economy.
Norman Lamont was Chancellor of the Exchequer from l990-l993 and introduced three Budgets. This was a difficult and controversial time with a deep recession and Britain's exit from the ERM on "Black Wednesday". Despite all the criticisms made at the time, today many economists consider that the tough decisions taken laid the foundations for the boom following 1992.
Sir Alan Walters, economic advisor to Lady Thatcher, in a letter to the Times described Lord Lamont in his post ERM situation "to be not only the most effective but also the bravest Chancellor since the war". Norman Lamont published a self-deprecating and amusing account of his time as Chancellor under the title "In Office". His book was described in the Independent newspaper as "Out of the top drawer of political memoirs".
Prior to becoming a MP, Norman Lamont was a Merchant Banker with NM Rothschild and Sons, whom he joined after reading Economics at Cambridge. Norman Lamont was made a Life Peer in July 1998. He currently is Chairman of the British Romanian and British Iranian Chambers of Commerce and holds directorships with RAB Capital, Balli Group PLC and is an advisor to the Rotch Property Group.
Norman Lamont is a fierce critic of the Euro.
"The event, and in particular Lord Lamont's speech, was a great success and many of our delegates commented on his surprisingly amusing speech. Everyone very much enjoyed it."  Informa on Lord Lamont - May 2009
Read More