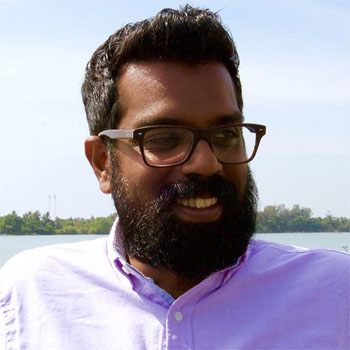 Since quitting his career as a maths teacher seven years ago, Romesh Ranganathan has gone onto make a real name for himself. The last few years have been incredible for Romesh with two series of his BAFTA and RTS Nominated series Asian Provocateur receiving critical acclaim.

Romesh is a regular on our TV screens best known for his performances on BBC One’s ‘Live At The Apollo’, ‘Have I Got News For You’, ‘Jack Dee’s HelpDesk’, BBC Two’s ‘Mock The Week’, ‘The Apprentice: You’re Fired’, ITV’s ‘Play To The Whistle’, ‘The Jonathan Ross Show’, ‘The Royal Variety Performance’, ‘Live From The Palladium’, Channel 4’s ‘Alan Carr Chatty Man’, ‘8 Out Of 10 Cats Does Countdown’ and ‘8 Out Of 10 Cats’, Sky 1’s ‘A League Of Their Own’, Dave’s ‘Taskmaster’ and Sky Arts ‘Passions: Richard Pryor By Romesh Ranganathan’.

His two Edinburgh Festival shows, ‘Rom Com’ and ‘Rom Wasn’t Built In A Day’ were nominated for the prestigious Edinburgh Fosters Best Show Award in August 2014 and Best Newcomer Award 2013. Well respected by his peers Romesh has also been honoured to support several of his comedy heroes including; Seann Walsh, Kevin Bridges, Bill Burr and Ricky Gervais.

2018 was a busy year with Romesh filming his new BBC2 series ‘The Misadvenutres Of Romesh Ranganathan’, Sky 1 commissioning a six-part series of ‘Rob & Romesh Meet’, becoming the new regular on ‘A League Of Their Own’, taking on a new role for Dave in ‘Judge Romesh’ as well as writing and starring in his own Sky 1 sitcom ‘The Reluctant Landlord’.

2019 promises to be even busier! Recently Romesh embarked on his career in America with the launch of his own series ‘Just Another Immigrant’ on Showtime which has received critical acclaim selling across the globe and will be appearing on screens in the UK early this year. His time in America has seen him appear twice on ‘James Corden’s Late Late Show’ and debut on ‘The Late Show with Stephen Colbert’.