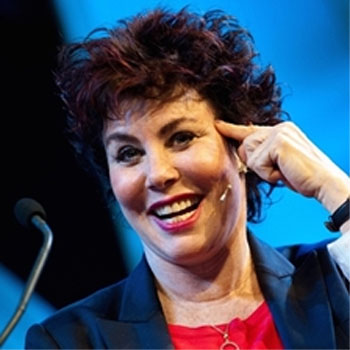 Following her hugely successful career with BBC television as an interviewer and comedian, Ruby Wax has now turned her attention to the study of psychotherapy and neuroscience graduating from Oxford University in 2013 with a Master‘s degree in Mindfulness Based Cognitive Therapy.
She is the author of the best-selling book Sane New World.  Described as a guide to saner living, Ruby explains how our minds can jeopardize our sanity, and that to break the cycle, we need to understand how our brains work, rewire our thinking and find calm in a frenetic world.  Her show of the same name, combines neuroscience, mindfulness and comedy, helping audiences to become the masters, not the slaves of their minds.  Sane New World has toured both internationally and in London‘s West End.
Ruby also founded  Black Dog Tribe, a social networking site providing information and social support for people suffering with  mental health issues.  She presented her TedTalk at TedGlobal 2012  What‘s So Funny about Mental Illness?
Ruby‘s most recent  bestselling book is ˜A Mindfulness Guide for the Frazzled‘ and her new show of the same has gone on tour.
She was recently awarded an OBE for services to mental health.

"The client loved her and everyone enjoyed themselves....thanks so much for arranging the pre event briefings - they made all the difference" The Conference People - Ruby hosted an event for Novo Nordisk

"Ruby was great fun! She certainly helped make the event a sell out and was very funny"  Caspian Publishing - Ruby spoke at a Legendary Dinner

"Ruby Wax was sensational. She was an inspired suggestion. Our client was thrilled. Thanks as ever"   Blueprint Partners - Ruby took part in a team building weekend for Orange