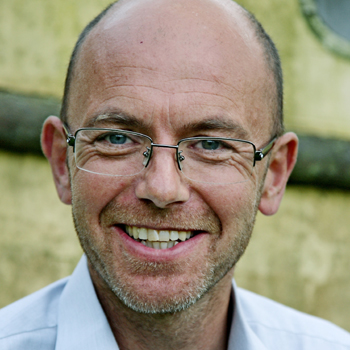 Wayne Hemingway was born in 1961 in the seaside town of Morecambe.  Maybe not the most appropriate surroundings for one of Britain's most acclaimed designers, but then Wayne never has been very appropriate anyway.
Wayne's earliest memories are of his mum and Nan dressing him up as Elvis, a Beatle or Tarzan and being paraded up and down Morecambe pier (evidence available!) or being held aloft in a wrestling ring by his Red Indian father, Billy Two Rivers.  These early child-modeling stints went some way towards influencing the youth who was forever experimenting with styles and cultures and reinventing himself whenever the next big thing came along.  Northern Soul was discovered at the tender age of 13, then Disco, Punk, New Romantic and Rockabilly - the list goes on.
After spending most of his childhood being “dragged up in Blackburn, the young and multicultural Hemingway left school with 10 O'Levels and 4 A'Levels.  In 1979 he went on to undertake another 'inappropriate' move for a future fashion designer by gaining a Degree in Geography and Town Planning at University College, London.
The move that sealed Wayne's fate was taken to fuel funds for the band that he then played in (he says that he's burned the evidence but we know where it is!).  One day he decided to empty his wardrobe and that of his childhood sweetheart (now wife Gerardine) and took the contents to sell on Camden Market.  The realisation that money could be made from fashion suddenly dawned.
With Gerardine, Wayne built Red or Dead into a label that received global acclaim resulting in winning the prestigious British Fashion Council's Streetstyle Designer of the Year Award for an unprecedented 3 consecutive years in 1996, 1997 and 1998. After 21 consecutive seasons on the catwalk at London Fashion Week, Wayne and Gerardine sold Red or Dead in a multi million cash sale.
In 1999, having sold Red or Dead they set up HemingwayDesign, which specializes in affordable and social design. The highest profile project is, The Staiths South Bank, a 800 property mass market housing project on Tyneside for  Taylor Wimpey Homes where HemingwayDesign are involved from the master planning, the architecture through to the landscaping and marketing of this groundbreaking project  .Over 500 homes are now lived in and The Staiths has won a series of high profile awards.

HemingwayDesign is now a multi disciplinary design agency led by two generations of the Hemingway family and a wider team of talented designers.

Their current major initiative in urban design is the re working of 'tired' large social housing developments in Maidenhead , Aylesbury and Kings Lynn  They have worked with West Lancs Council and English Partnerships on a project to create a vision and masterplan for 60's new town Skelmersdale. Working with Copeland Borough Council and the NW Development Agency, HemingwayDesign worked on a vision for Whitehaven.

More recently Hemingway Design have been doing some impactful and noteworthy work in the area of Branding and Narrative/ Values  for FTSE 100 companies.

Place Branding for towns like Middlesbrough , Bognor Regis and Thamesmead

Wayne is the Chairman of Building for Life, a Design Council CABE (Commission for Architecture and The Built Environment) funded organisation.

He received an MBE in 2006, is a Professor in The Built Environment Department of Northumbria University, a Doctor of Design at Wolverhampton, Lancaster and Stafford and a Fellow of Blackburn College.

Wayne talks on housing, urban design, education and the creative sector and is a host of creative industries related awards events and does charity work for Noise Festival, The Princes Trust, Shelter, Oxfam and Traid.

"Wayne was excellent - a great speaker who was spot on for our audience. He went down really well and was perfect for getting our message across."  Wayne spoke at HP Digital Printing's event

"Thank you so much for a terrific session during the Vision forum - you were inspiring and engaging, and delivered some key messages that Vision people need to hear."  Partner for Vision, BBC
"A  big thank you to you too for flying out for our Singapore  Symposium you really energised the group with new enthusiasm and perspectives on charity. The feedback we've had has been fantastic. What an incredible story!  You have out-done Sir Richard Branson based on the interesting, fun and socially responsible projects that you've completed."  Oranutt Charities Aid Foundation
Read More