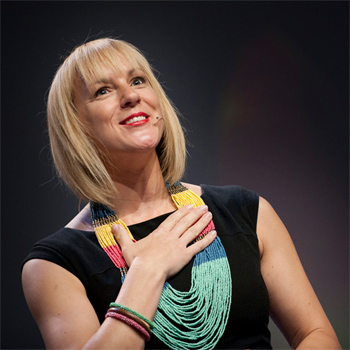 Debra’s just back from LA where she has sold the rights to her story which is set to become a Hollywood Movie. More details to follow!

Debra packed an enormous amount into her 20's. Reading her CV is exhausting in itself! To add to her first class honours degree she has had entrepreneurial success with the launch of two limited companies, is a published author, has medals at World Championship level, is on the board of the Duke of Edinburgh's Award, has successfully rowed solo across the Atlantic Ocean amongst other expeditions, works for the BBC as a presenter and has an MBE from the Queen.

Rowing the Atlantic
Debra was heralded "¦Britain's latest sporting heroine." (The Times) when the media worldwide went crazy for the story of the 5ft 5" young lady who carried on rowing alone when her then husband, a 6ft 5" experienced oarsman, left the boat after developing an uncontrollable fear of the ocean. Debra, who was loving life at sea in a 23 foot plywood boat, saw no reason to stop and rowed on to become the youngest and only the third woman in the world to have rowed an ocean solo.

The 3000 mile journey that was initially supposed to take 6 weeks took Debra a staggering 3 Â½ months and saw her battling with 30 foot waves, force 8 squalls and sharks, while having to dodge tankers that came too close for comfort on more than a few occasions. Worse than all of this, however, was dealing with the loneliness and solitude, but focussing on one motto kept Debra going: "Choose your attitude" and she certainly did.

Debra and the Media
The media's response to Debra's Atlantic success was phenomenal, although perhaps not surprising. She is young, highly intelligent, articulate and very telegenic. Her ease in front of the camera, drive and enthusiasm led to a number of presenting jobs. Most recently Debra has been fronting a new interior design programme for BBC1 having completed three series as the presenter of Big Strong Boys for BBC1 Daytime. She also works for BBC Grandstand, was the subject of a documentary for BBC Extreme Lives and presented a 1-hour ITV documentary on the Southampton Boat Show alongside Top Gear's Vicky Butler-Henderson and GMTV's Ben Shepherd.

Debra - Motivational and after dinner speaker
Debra's overwhelming positivity and 'go for it' attitude is contagious, while her modesty is endearing. She regularly delivers both motivational presentations and after dinner speeches using her story to powerfully but subtly draw out key business and personal lessons. Debra is an incredibly natural communicator and often very emotive. She shares her highs and lows, personal battles and victories to help illustrate in a very human way what we are all capable of. She is not a motivational speaker reliant on buzz words, hype and jargon. Her main themes are how to stay motivated, being adaptable to change, overcoming obstacles, how to improve your team-working through encouraging one another and how to choose the right attitude however impossible the end goal may seem.