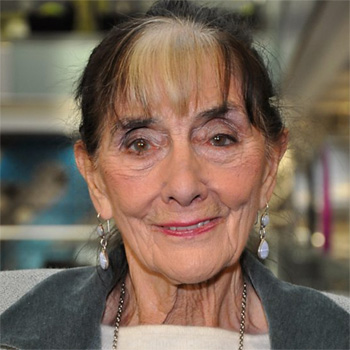 June's career began at the Old Vic playing 'Foible' in The Way of the World - as maid to Edith Evans as 'Lady Wishfort', but she is probably best known to British and International television audiences as the irrepressible Dot Cotton in BBC's flagship drama EastEnders which she played for more than eight years. Her 'marathon performance genius' (Time Out) as the chain-smoking, bible thumping, hypochondriac and arch-gossip of the tumble-driers, resulted in her character becoming a national institution. June has returned periodically to EastEnders, delighting audiences when 'Dot' returned to Albert Square once again in the autumn of 1998. The character she created was so successful it resulted in the creation of a puppet on Spitting Image and she was one a just a few fictional characters to have been latex-ed.

Her debut as a director was in Folkestone with the Pharmaceutical Migraines and was followed up by the one act version of Double D by Matthew Westwood . The full version launched at the Edinburgh Festival.

June's theatre work is extensive and has has included; two years touring with the original Young Vic Company in The Merchant of Venice (as 'Jessica' and 'Portia'), The Knight of the Burning Pestile (as 'Luce') and The Servant of Two Masters (as 'Beatrice'). No stranger to the big screen, her film credits include Sunday Bloody Sunday, Straw Dogs, The Fourteen (the mother), Murder By Decree, Nijinsky, Sherlock Holmes, Misunderstood, Lace and Mr Bean.

June has played 'Amelia Sayers' in an episode of The Verdict, 'Grandma' in George's Marvellous Medicine and appeared as 'Nanny Slagg' in the BBC's epic dramatisation of Mervyn Peake's Gormenghast. She also starred opposite Penelope Keith in ITV's one off drama Margery and Gladys.