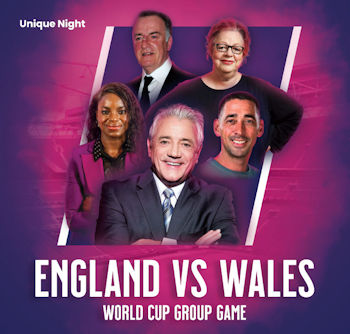 And finally, as part of our 30th Anniversary celebrations, we going back to the future!

The company originally started out putting on sporting dinners around the M25, before people started asking us to supply their own events, and the rest, as they say, is history. To mark our 30th Anniversary in November, we have decided to put on a big screen viewing of the Wales vs England group game at the London Marriott, Grosvenor Square - it will be hosted by Colin Murray and feature punditry from Kevin Keegan, Kevin Ratcliffe and Eni Aluko followed by a comedy set from the legendary Jo Brand.

We will be entertaining some clients at the events, but also selling tables to the event. More information available on the dedicated site we have setup: www.uniquenight.co.uk