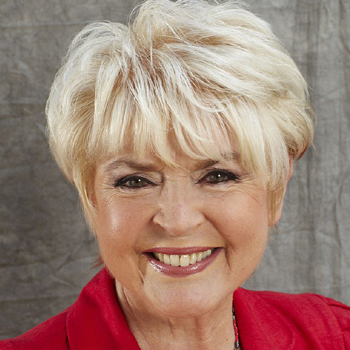 Gloria Hunniford was born in Northern Ireland and was the first woman to have her own daily radio show on BBC Radio 2, which she presented for twelve years until 1994. She had her own television chat programme, Sunday Sunday, on London Weekend Television. She has appeared on and presented numerous shows including Gloria Live, This Morning, Holiday, Songs of Praise and Open House with Gloria which gave Channel Five some of its highest ever ratings.

Since 2010, Gloria Hunniford has co-presented Rip Off Britain, a consumer complaints programme on BBC Television along with Angela Rippon and, for the first two series, Jennie Bond, and then, for the third series, with Julia Somerville.  Together, the trio of Hunniford, Rippon and Somerville also presented Charlie's Consumer Angels.
In 2012, Gloria presented the BBC One documentary series Doorstep Crime 999.
She has won several prestigious awards, including TV Personality of the Year, Radio Personality of the Year and a Lifetime Achievement Award, and has an Honorary Doctorate from Queen's University Belfast.
Read More