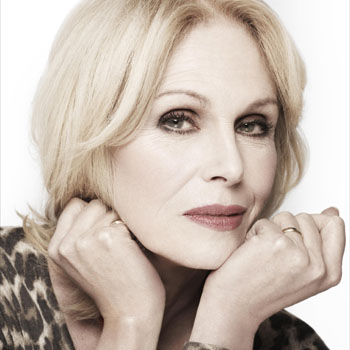 Joanna Lumley was born in Kashmir in 1946 and came to England as a young girl to complete her schooling at St Mary's School in Sussex.

Early television work includes Steptoe & Son, The Persuaders, General Hospital and Coronation Street. She played 'Purdey' in 24 episodes of 'The New Avengers' and recorded 39 episodes of 'Sapphire & Steel' both programmes being constantly transmitted around the world. Her experiences of living alone on a desert island were filmed for a BBC Special 'Girl Friday'.

Joanna is probably best known on television for her hugely popular role as 'Patsy' in the award winning series 'Absolutely Fabulous' for the BBC. Other television includes 'Class Act','Coming Home' and 'Nancherrow'.

In 1996 she travelled to Bhutan to film a journey made by her grandparents 'In The Kingdom Of the Thunder Dragon',  'A Rather English Marriage' (nominated for a BAFTA as Best Actress) and most recently 'Dr Willoughby' for Pearson

Joanna appeared for six weeks at the Lyric theatre, Hammersmith in 'The Letter' directed by Neil Bartlett. Other theatre work includes 'Private Lives', 'Noel & Gertie', 'Hedda Garbla', 'Blithe Spirit', 'An Ideal Husband' at the Chichester Festival, 'The Cherry Orchard', 'Vanilla', 'Revengers Comedies' and 'Who Will I Be Tomorrow'.

Other work has included: The Curse of Fatal Death ” a special 1999 Comic Relief episode of Doctor Who ” where she was a female version of the Doctor, a film about a journey made by her grandparents in Bhutan - In the Kingdom of the Thunder Dragon (1996) - and A Rather English Marriage (nominated for a BAFTA for Best Actress 1999) and Dr Willoughby. In 1995 she provided the voice of Annie the rag doll in the animated series The Forgotten Toys. In 2000 she co-produced a new drama series entitled The Cazalets. She has also appeared in a TV series on Sarawak, where she spent time as a girl.

She starred as the elderly Delilah Stagg in the 2006 sitcom; Jam & Jerusalem alongside Dawn French, Jennifer Saunders and Sue Johnston. In 2007 the second series of the drama 'Sensitive Skin' aired on BBC where she played the main character Davina Jackson. She also appeared as a guest host on Channel 4's The Friday Night Project, in 2007.

Joanna Lumley has gained prominence as a voice over actress and is one of the most recognised voices in Britain. Users of AOL in the United Kingdom are familiar with Joanna Lumley's voice. She recorded the greeting "Welcome to AOL" for that company.

Joanna was awarded an OBE in the 1995 New Years honours. She is married to the conductor Stephen Barlow and lives in London.